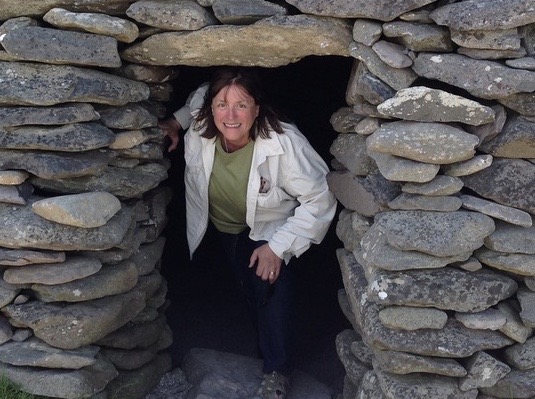 I had the spectacular great fortune of growing up in the diverse bioregion of southern NJ with its ocean, bay, pine barrens and cedar swamps. Walking barefoot in the sand, swimming in the ocean, sailing, surfing, and looking for turtles in the cedar swamps were joyfully embedded in my psyche.  I can attribute this good fortune to my wonderful parents who adopted me at birth and eventually moved to this paradise. A few years later, my sister also joined our family and we officially  became a League of Nations! English, Italian, Asian, and me ~ a blend of whatever!

Art has always been my passion!  After graduation, I landed my dream job at the Metropolitan Museum of Art in New York City. This wonderful opportunity allowed me to be steeped in art history and to enjoy the work of great artists of vast diversity.  Through this exposure, I began to realize that nice, safe art bored me. Even more disturbing, I realized that the art world was a man’s world - featured female artists were far and few between!

Artists like Judy Chicago, Pauline Boty , Evelyne Axell, Rosalyn Drexler, and surprisingly a Catholic nun, Sister Mary Corita Kent, an art teacher at Immaculate Heart College in Los Angeles inspired me. In the eighties I followed the works of the Guerrilla Girls, an anonymous group of feminist, female artists devoted to ending sexism and racism within the art world. Conceptual art, Dada, college, pop art, political themes, made me feel alive! My heart beat a little faster, and informed my own art making.

My life has been nothing short of eclectic at best, mostly unbelievable, maybe even miraculous at times. Truthfully co-founding a monastery was not even a blip on my radar! I was a 60’s kid, a Woodstock hippy, married to a rocker, with 4 amazing children. Then like so many, my life situation changed. In 1994 I met Thomas Berry and that changed everything!

I became an associate member of St Gabriel’s Monastery in 1994.  At that time I helped Sr Gail with her ministry:  “Homecomings: The Center for Ecology and Contemplation”.  In 1998, the Passionist sisters of St. Gabriel’s Monastery began a discernment process to determine the future direction of the monastery in Clark’s Summit, PA, as the sisters were for the most part well past retirement age.  Sr. Gail proposed that she, Sr Rita and I be given permission to found a new monastery community dedicated to the healing and protection of Earth.

We hoped to respond to the cosmological and ecological consciousness that Fr. Thomas Berry had instilled in us.  The community agreed! This led to what Thomas called “Our Grand Adventure”….

In 1999, along with Sr. Gail, Sr Rita and Fr. Thomas Berry I embarked on the co-founding of Green Mt. Monastery.  In June 1999, we moved to Weston, Vermont, to begin our ministry and land search, eventually finding the perfect location in Greensboro, VT.   Over the next ten years,  I had the privilege of spending many hours with Fr. Thomas in North Carolina. Thomas had a sweeping vision of history and helped us situate ourselves within the comprehensive context of an unfolding universe. It was both exciting and daunting.

The biodiversity in Vt - the mountains, forests, streams, spring fed lakes, natural brooks, the ever changing seasons - resonated with me. The beauty of our new landscape reawakend  the intense love of nature that I grew up with. This was truly a Homecoming!

My love of Art continued throughout my years at GMM, finding fulfillment in writing icons as we worked to establish GMM.  Mary of the Cosmos is a well known image I created in 2004, it has been published in several volumes and prints of this icon have circled the globe.

The art of feeding others became another artistic expression for me. Cooking has always been a joy and a way of expressing my creativity and love for others. I have had the privilege of feeding the the GMM community and many guests over the years from our organic gardens.

We have established a Thomas Berry House in northeast Pennsylvania that is a space for the Thomas Berry Eco-Arts Alliance and art studio that I work from as a contemporary artist, while living closer to my family.

Now I divide my time between GMM in Greensboro, VT and our Thomas Berry House in Beach Lake, Pennsylvania.